DOJ investigating airlines for collusion, United plans biofuel flights, future jet engine tech from Rolls-Royce, Solar Impulse makes it to Hawaii, a report from the Shuttleworth Collection air show, looking back on McNerney and ahead to AirVenture Oshkosh.

This summer, United plans to use biofuel on a regular scheduled route. The biofuel will be “generated from farm waste and oils derived [from] animal fats.” Four to five flights per day will use a 30 percent biofuel mix.

United Airlines has invested $30 million in California-based biofuel company Fulcrum BioEnergy. The strategic partnership includes an agreement that contemplates the joint development of up to five projects located near United’s hubs. These projects expect to produce as much as 180 million gallons of biofuel per year, with United agreeing to buy up to half that amount.

First, the “Advance” engine with a bypass ratio of more than 11:1, a pressure ratio more than 60:1, fuel-burn at least 20% better than the current Trent 700, a composite-titanium fan, and a composite fan casing. EIS around 2020.

Changes for the Advance include reallocating the work contributed by the various compressors and turbines. By lightening the load on the HP spool, RR achieves better efficiency and commonality with the UltraFan core.

With the geared UltraFan, the low pressure turbine is gone and the engine is more like the 2-spool engines P&W and GE produce. Other technologies to be introduced include cooled cooling air (compressor bleed air through a heat exchanger) and blings or bladed rings, an advancement from blisks, or bladed disks.

As fan engine diameter continues to increase, mounting under the wing becomes less practical. Clean sheet airplane designs are gravitating to engines on top of wings, or engines embedded (or partially embedded) in the tail.

The Solar Impulse finally left Japan on June 28 and landed in Hawaii on July 3. 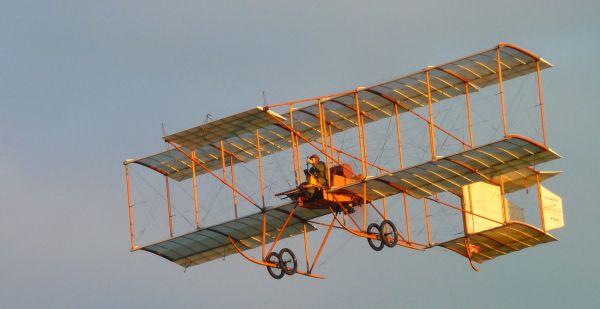 Roland attended a rather special airshow at the Shuttleworth Collection museum in Bedfordshire, England. He brings us his impressions, and some great photographs.

The producer’s great uncle recorded 90 minutes of personal footage during WW II that he mailed home from the war. The footage was transferred to digital media, then the producer had the thought to find the pilot of a Spitfire that crashed on film. He found the pilot, who had never seen the footage.

What does it take to restore a World War Two Spitfire?

A rare Mark 1 Spitfire shot down during World War Two was restored and will be sold at Christie’s July 9, 2015. 22,500 Spitfires were originally built, just 56 are still airworthy, and most of these are later versions of the aircraft. There are only four Mark 1s still flying.

What do you do when the wheel from a jet lands on your roof?