We interview Solar Impulse 2 pilot André Borschberg, and Rob gives us an AirVenture Oshkosh 2015 debrief. We also talk with Rick Beach, the Safety Chair of the Cirrus Owners and Pilots Association.

The Solar Impulse 2 is attempting to become the first solar powered aircraft to fly around the world. This is a privately financed effort led by Swiss engineer and businessman André Borschberg and Swiss psychiatrist Bertrand Piccard. They are also the pilots for the Solar Impulse, but since the plane has only one seat, they’ve been alternating legs on this around the world trip. In this episode we talk with André Borschberg, who flew the most recent leg from Japan to Hawaii over a period of five days, setting a new world record for solo flight. 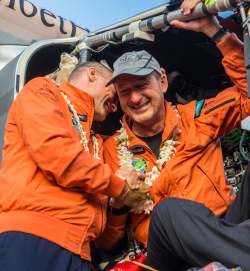 The Solar Impulse 1 first flew in 2009, and was designed to fly for up to 36 hours. In July 2010, it became the first solar plane to fly for more than 24 hours, including nearly 9 hours of night flight. In 2013, it flew a multi-stop flight across the entire United States.

The aircraft carries 1400 pounds of Lithium-ion batteries that drive four 17.4 horsepower electric motors, each swinging a 13-foot long propeller. Maximum speed is 77 knots, though typically the plane flies at 33 knots at night to save power when the aircraft is running off just battery power.

During the daytime, when maximum power is available, the batteries are charged to 100% of capacity and the aircraft climbs to about 29,000 feet. At night, the aircraft is allowed to slowly drift down to about 6,000 feet, to minimize the drain on the batteries. Even so, the batteries typically discharge to about 15% to 20% of total capacity before the sun comes up and the cycle is repeated.

The real limit to how far the Solar Impulse can fly is the pilot. On multi-day flights, the pilots take 20 minute naps that only about 2 ½ hours during a 24-hour period. Yoga and other exercises are used to maintain alertness.

Rick is Aviation Safety Chair of the Cirrus Owners and Pilots Association. He wanted to understand how pilot behavior needed to change to fully take advantage of the innovative safety features on the Cirrus and other aircraft. Rick wanted to know why pilots were crashing and he found that it was because of the way pilots were making risk assessments.

Rick has a life-long interest in aviation, but didn’t start pilot training until 2001 when he bought a Cirrus SR22 based on its safety and technology features, as well as the strong pilots and owners community. Rick now has over 3500 hours in the Cirrus.

Cirrus, of course, has an airframe parachute system and Rick began studying Cirrus accidents to uncover reasons why pilots did not use the system. He even coined the phrase “Pull Early, Pull Often!” to encourage pilots to use the system before the situation turned dire.

Now Rick is working on a concept for the Cirrus Owners and Pilots Association (COPA) University to expand their safety activities, funded in part by a charitable COPA Safety and Education Foundation.

Rob attended AirVenture Oshkosh 2015 and was an instructor at the EAA Pilot Proficiency Center. He gives us his observations from the event.

Society of Aviation and Flight Educators – SAFE is a member-oriented organization of aviation educators fostering professionalism and excellence in aviation.

Drones got a lot of attention with Jack Pelton underscoring their importance. Embry-Riddle was there to talk about their drone degree and a drone cage was set up for demonstrations. Ghost Drone and other Chinese manufacturers exhibited their products.

The boys are back in the studio and Grant’s trying VERY hard not to explode over the news that Qantas is doing very well thanks to Alan Joyce. It’s not that they haven’t turned the corner and improved their stock price, it’s more that they’ve done it despite Joyce’s previous management disasters.

Meanwhile, Qantas’ competitor Virgin Australia got the gong for most punctual domestic carrier in June. Nice to see as they’ve been out of the running for a while.

And if you missed last week’s full Australia News Desk report….and trust us, you did…you can find it over here: Episode 360: Grant Made it to Fiji. 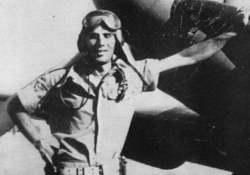 Lou Lenart is one of the men featured in “Above and Beyond,” Nancy Spielberg’s documentary film about Jewish pilots from the U.S. who established Israel’s air defenses. Lenart died from congestive heart failure at age 94. In AirplaneGeeks 348 we talked with Harold Livingston, who also appears in the Spielberg documentary.

1 thought on “AirplaneGeeks 361 A Solar Impulse Pilot, a Cirrus Pilot, and an Oshkosh Debrief”