Jason Blair is an active single and multi-engine instructor. He is a National Association of Flight Instructors Master Flight Instructor, and an FAA Designated Pilot Examiner for both part 61 and part 141 training providers. Jason was involved in the early stages of the FAA/industry efforts that developed the new Airman Certification Standards (ACS) that became effective June, 2016. 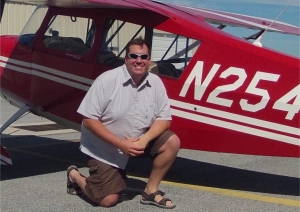 In this episode, Jason explains the differences between the Practical Test Standards and the new Airman Certification Standards, and when they apply. He offers advice for private, CFI, and ATP checkrides, and explains some of the common errors made by applicants. Jason tells us about the checks that Examiners make, the process they follow, and what the FAA is looking for. We also hear about the process for becoming an FAA Designated Pilot Examiner.

Jason was named the 2016 Michigan CFI of the Year by the FAA, and over 1000 pilot certificates have been issued in Jason’s role as Examiner. Jason writes for a number of aviation publications and he’s active in the general aviation industry.

Starting his flying experience at the age of 15, and soloing at 16, Jason received his private pilot’s certificate at 17. While he pursued both undergraduate and master’s degrees from Western Michigan University in non-aviation fields, he continued his aviation passion through flight training at local FBOs, obtaining his instrument, commercial, and instructor certificates.

Jason flies general aviation aircraft for much of his personal and business travel, and has served as the Executive Director of the National Association of Flight Instructors, and represented the flight training community on a variety of committees including the FAA’s Runway Safety Council, the General Aviation Joint Steering Committee, the TSA Aviation Safety Advisory Council, NATA’s Flight Training Committee, and others. Currently, Jason works for a variety of companies and associations focusing on flight training regulations, procedures, and safety as a writer and consultant.

U.S. senators quiz airlines on IT systems after Delta disruption

Senators Richard Blumenthal and Edward Markey sent letters of concern to a number of airlines in the wake of recent computer system failures at Southwest and Delta. They point out that with such a concentrated industry, any one outage can affect a large portion of commercial aviation, and inconvenience many travelers. The senators want to know how affected travelers will be accommodated, and what measures are being taken to ensure the security and reliability of airline IT systems.

Industry projections put the greatest airline growth in Asia. Boeing projects that the number of commercial planes in China will triple by 2034. Bloomberg says that means China will need to hire 100 pilots per week over that time period, and they are paying big salaries to get them: as much as five times more for new hires, and in some cases about 50 percent more than senior captains at Delta. See also Chinese Airlines Wave Wads of Cash to Lure Foreign Pilots.

Boeing is looking at a future cabin experience that includes the ability for passengers to interact with the airplane from their smartphone. Commercial Airplanes’ Product Development engineers have created an airplane cabin technology demonstrator they call v-Cabin where concepts can be developed and tested. Passengers could control personal lighting, order food or drink items, interact with the IFE system, and even check lavatory availability, all over a wireless network.

It comes as no surprise that the interest in open ATC positions is very high.

Will Textron seek to add Learjet to its portfolio?

The OV-10 Bronco, Part 1. If your specs are drawn right, you get an aircraft that can successfully complete its mission. Sometimes that’s just the tip of the iceberg of what it can do. This episode we talk about development and combat and Medal of Honors. In Part 2, we’ll look at foreigners, civilians, and the return to combat.

David participated in the AirlineGeeks/American Airlines activities for National Aviation Day. His interviews and stories will be presented in episode 417 Bits and Pieces XV.