We talk with the producer and director of a film about the ways aviation has transformed the world. Also, relationships between Middle Eastern and U.S. airlines, the outlook for business aircraft sales, Chinese radar advancements, a report of health problems with crew uniforms, and a compelling story by a Marine. 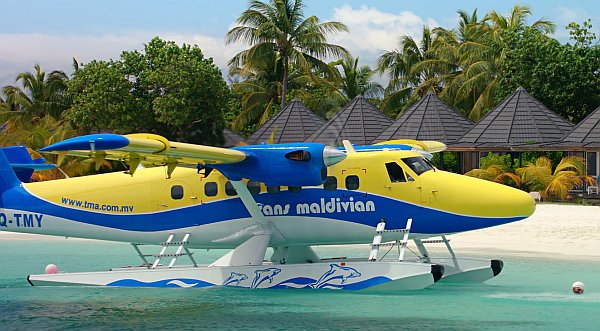 Twin Otter seaplane preparing to dock in the Maldives, from Living in the Age of Airplanes

Brian J. Terwilliger is a licensed pilot captivated by flight since childhood. He is a filmmaker who produced and directed the National Geographic movie Living in the Age of Airplanes, narrated by Harrison Ford and featuring an original score by the late Academy Award® winning composer James Horner (Avatar, Titanic). The movie looks at the dramatic ways aviation has transformed the world, and was filmed in 18 countries, and across all 7 continents.

Following its premiere at the Smithsonian National Air & Space Museum in Washington, DC, the film continued its successful run on giant screen, digital, IMAX® and museum cinemas worldwide in 2015/2016. It has now been released digitally and on DVD / Blu-ray, along with the release of the original soundtrack.

Brian’s first film, the 2005 feature One Six Right, focuses on the romance of flight as seen through a day in the life of the Van Nuys Airport, a local general aviation airport in a Los Angeles suburb.

The CAPA Centre for Aviation awarded Qatar Airways their Airline of the Year award. In a subsequent interview with Qatar CEO Akbar Al Baker, he talked about wanting to strengthen the airline’s strategic partnership with American Airlines.

GAMA, the General Aviation Manufacturers Association, released a report indicating that 3rd quarter business jet and airplane shipments worldwide were 534 units, compared to 542 a year ago. Billings were $4.1 billion, versus $5.3 billion in 2015.

Teal Group: Slow Aircraft Sales May Be The New Normal

Teal Group’s Richard Aboulafia is “cautiously confident” that the business aviation won’t get worse, but we may be seeing the new normal.

For some time, China has been working to develop a Very High Frequency (VHF) active-phased array radar. This kind of system has a greater ability to detect stealth aircraft. At the Zhuhai Air Show, China showed the JY-27A 3-D long-range surveillance/guidance radar and the broader bandwidth JY-26 Skywatcher-U.

American Airlines has new uniforms, and some flight attendants are complaining that they cause health problems. The cause isn’t known with certainty at this time.

Favorite Aircraft – by a Marine, submitted by a listener and read by our Main(e) Man, Micah.

666 The Devil’s Number – the Amazing Service of Col. Hank Snow [PDF] This story by John Mollison is available for free in honor of Veteran’s Day. It’s about one of the greatest combat pilots you may have never heard of, who flew 666 combat missions in three wars. John was a previous Airplane Geeks guest and produces Old Guys and Their Airplanes.

Fabulous Farnborough Airshow Photographs by Mary B. Lyons has been updated and is available in the U.S. at a special price.