Jeanette Remak and Joe Ventolo Jr. from Phoenix Aviation Research tell the story behind the Lockheed A-12 Blackbird at the Intrepid Sea, Air & Space Museum in Manhattan. In the news, we look at FAA reauthorization bills and the battle shaping up in Congress, this year’s Paris Air Show, the Catalina Flying Boats’ DC-3 aircraft, the youngest pilot in Australia, and an Israeli court ruling on reseating women in the airplane. 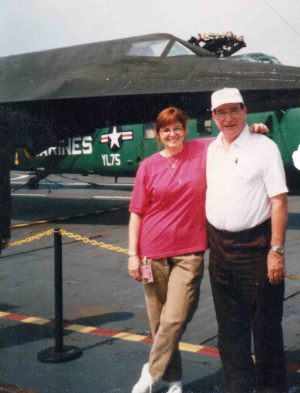 Janet Remak and Joe Ventolo Jr. with the A-12 on the Intrepid.

Jeannette Remak is the owner of Phoenix Aviation Research. She’s a military aviation historian, a writer, author, artist, and photographic engineer. Her books include XB-70 Valkyrie: The Ride to Valhalla and A-12 Blackbird: Declassified.

In the mid-1990s, Jeannette worked as the volunteer Aircraft Historian for the Intrepid Sea, Air & Space Museum in Manhattan. She performed research for maintenance and restoration, and worked on the aircraft under her control at the museum, including many U.S. Naval and U.S. Air Force aircraft on loan. Jeannette restored sheet metal, she controlled airframe titanium corrosion, and she appropriated parts and specialized equipment for work on A-12 aircraft.

Working with the US Navy’s Curator office, Jeannette is responsible for the rescue of the Sikorsky RH-53D that is the lone survivor of the failed United States hostage rescue mission in Iran. The CH-53D is now restored and on display at the JFK/ US Navy Seal Training School in North Carolina.

Joseph A. Ventolo, Jr. is the former curator of the National Museum of the US Air Force. His career started in November 1959 when Joe joined the 269th Combat Communications Squadron of the Ohio Air National Guard. In 1965, he received a commission as a 2nd Lieutenant as a communications officer. He left the Ohio Air National Guard in 1966 and transferred to the Air Force Reserve where he was promoted to 1st Lieutenant and remained in the Air Force Reserve until 1970.

Joe is currently a co-owner/consultant with Phoenix Aviation Research. He has co-authored articles in the Atlantic Flyer, and written three aviation books, all with Jeannette Remak.

Phoenix Aviation Research Facebook page with all the photos.

From the Paris Air Show

In a statement, American Airlines said: “Qatar Airways indicated that it has an interest in acquiring approximately a ten percent stake.”

Airbus unveiled the A380plus, with 4% lower fuel cost. The plane features winglets and seating for 575 in four classes.

Boeing planning on hypersonic jets for commercial flights, though the Concorde’s memory lingers

Boeing says we could see hypersonic jets in commercial use in the next decade or two.

Boeing said it has 240 orders and commitments. Some orders are conversions from earlier orders for other MAX models. The MAX 10 is a stretch of the MAX 9 that seats up to 230 passengers and is designed to compete with the Airbus A321neo.

PAS17: The Revolution Will Be Data-Driven, Airbus Looks Skywise

Test pilot Billie Flynn told Aviation Week, “After 10 years since first flight, with our first opportunity to demonstrate the capabilities and the maneuverability of the F-35, we are going to crush years of misinformation about what this aircraft is capable of doing,”

P&W signed an MOU with Japanese Aero Engines, a consortium of Japanese manufacturers. The partners will spend more than 100 billion yen ($898 million) to create small-aircraft engines.

CAE announced that the industry will need more than a quarter of a million cockpit crewmembers over the next 10 years. The CAE Outlook says:

Rep. Bill Shuster, R-Pa. introduced a proposed FAA reauthorization bill in the House. The Bill prohibits passengers from being removed from a flight after they’ve boarded, privatizes ATC, and requires airlines to post resources for stranded passengers online when the airline is disrupted by a computer outage. It also calls for the faster development of a traffic management system for small drones, faster approval process for commercial drone operators, and a new certification system for small-drone commercial operators.

Jerusalem’s Magistrate Court ruled that it was discrimination to ask a female passenger to change seats because an ultra-Orthodox Jewish man said he did he not feel comfortable sitting next to her.

After the 2017 Innovations in Flight event at the Smithsonian’s National Air & Space Museum, Jonathan Baron took David up in his Shark LSA. Jonathan was our guest in Episode 442 Shark Aero.

David Vanderhoof and Jonathan Baron with the Shark.