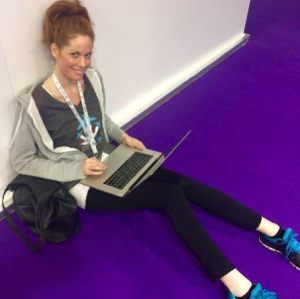 Mary Kirby has covered the aviation industry for almost 20 years as both a journalist and an editor. After working many years for Flightglobal, she launched Runway Girl Network, which delivers news and intelligence about the airline passenger experience industry, and also highlights the work and accomplishments of women in aviation. Runway Girl Network is a go-to site that encompasses a B2B2C model.

Mary describes the objectives of Runway Girl Network and gives us the benefit of her knowledge concerning current airline passenger experience issues. Seat space, both width and pitch, continues to grow as a concern in the eyes of the flying public.

We also talk about the job of aviation journalists today, and the role of the vocal passenger. Mary considers lessons learned from the Network and the need for increased diversity of gender and color among those writing about the passenger experience. We also look at the gap in coverage of the passenger experience from the perspective of those with disabilities or reduced mobility.

In a 31-second ad available at ATCnotforsale.com, “Sully” Sullenberger says that privatizing ATC would hand “control to the largest airlines, giving them the keys to the kingdom.”

Drones continue to cause problems for wildfire crews

The article explores some ways that drones could assist with fighting wildfires.

Rep. Steve Cohen (D-TN) introduced H.R.1467, the Safe Egress in Air Travel (SEAT) Act into the FAA reauthorization bill as an amendment. The amendment would ask the FAA to study evacuations and issue regulations for minimum safe-seat sizes.

Which airlines earn most from fees, frequent flyer programs? 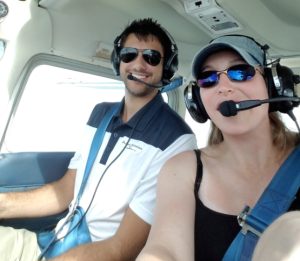 Nicki and her flight instructor.

In May, we received an email from listener Nicki. She was asking our advice about starting flying lessons in her late 30s and making a possible career change into flying. Nicki enjoys flying and in college, her friends used to take her up and let her fly the plane. At the time, Nicki couldn’t afford flying lessons and even now it would be a stretch for her.

Well, Nicki has started to take some steps and sent us a recording describing her progress so far.

1 thought on “462 Runway Girl Network and the Passenger Experience”