We talk about electric aircraft, automation, and new technologies in aviation with the Vice President of Global Innovation and Policy for the General Aviation Manufacturers Association. Also, airport access for general aviation, a GAMA jobs rally, the Department of Defense receives more aircraft than they asked for, a proposal for increased air cargo security, and interviews from South by Southwest with an astronaut and with the EAA. 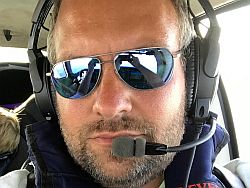 Greg Bowles is the Vice President of Global Innovation and Policy for the General Aviation Manufacturers Association (GAMA). Greg is responsible for identifying key technology opportunities and developing critical paths to success which will evolve the global safety, efficiency, and success of aviation.

Greg is in a unique position to talk about electric aircraft technology, regulatory changes, and other new aviation developments that impact the industry, pilots, and the general population. We discuss the state of electric propulsion, battery energy density, hybrid aircraft, and the rapid emergence of eVTOL electric aircraft. Greg illustrates some of the new options that electric power allows, and explains how the interaction between the human pilot and the technology has licensing and training implications. Greg sees a future where simplified vehicles open up aviation to a broader audience.

Greg leads the GAMA Electric Propulsion and Innovation Committee (EPIC) which represents the world’s leading aviation mobility development companies along with traditional aviation manufacturers as this community strives to enable new kinds of public transportation through the air. He also leads the worldwide design standards committee that is chartered to develop globally acceptable means of compliance for general aviation aircraft.

Greg has been an advisor to several long-standing ICAO panels and he’s the industry co-chair on the FAA’s Part 23 Reorganization ARC which has developed the rewrite of FAA part 23 regulations to assure they will address aircraft of the next twenty years.

Before he joined GAMA, Greg worked as a certification engineer at Keystone (now Sikorsky) Helicopter, and he was a design engineer at Cessna Aircraft Company (now Textron Aviation).

Greg holds a Bachelor of Science degree in Aerospace Engineering from Embry-Riddle Aeronautical University and a Master of Business Administration degree from Webster University. He is an active instrument-rated general aviation pilot.

In the U.S., most airports have Fixed Base Operators (FBOs) which provide many services to general aviation, including fuel and parking. Changes in the FBO customer base may have implications for general aviation.

GAMA To Stage Next Rally at Garmin’s Olathe Facility

The General Aviation Manufacturers Association (GAMA) is planning a jobs rally on in Olathe, Kansas, April 6, 2018, at the Garmin International Warehouse and Distribution Center. The event will feature government and industry leaders who will discuss the economic contributions of aviation, investment in products, the future workforce, and the promotion of STEM.

Congress appropriates a 28% increase in funding for new aircraft

The U.S. Government spending bill signed by the president on March 23, 2018, included 143 aircraft above what was requested by the Department of Defence. These include Lockheed Martin F-35 Lightning II fighters, F/A-18 Super Hornets, KC-46A tankers, and Lockheed C-130 Hercules aircraft. We look at the reasons for this and the implications.

The Act passed the House by voice vote and goes to the Senate. If enacted, the TSA Administrator would establish an air cargo security division which would conduct a feasibility study on expanding the use of computed tomography (CT) technology for screening air cargo transported on passenger aircraft, followed by a 2-year pilot program.

Student pilot Nicki provides an update on her flight training and tells us about a recent episode with her flight instructor.

At Long Last, Flat Earth Rocketeer Finally Manages to Blast Himself Into Sky at God Knows What Speed