Dave Shallbetter talks about the Sun ‘n Fun International Fly-in and Expo and Sun ‘n Fun Radio. Also, we note that Cirrus Aircraft will be receiving the 2017 Robert J. Collier Trophy for their Vision Jet, the recent noncombat-related air crashes that have resulted in the loss of US service members, and a proposal to use cargo hold space for a new passenger class. We have a positive story about the TSA, a new director of the National Air and Space Museum, some great listener feedback on the helicopter crash into the river in New York, as well as on the need to change the United Airlines company culture. 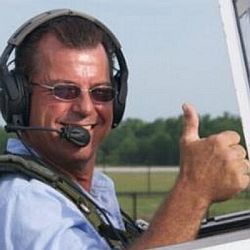 Dave Shallbetter is Chairman of Sun ‘n Fun Radio and a long time volunteer at the annual Sun ‘n Fun International Fly-in and Expo.  This year’s event is April 10 to 15, 2018.

Sun ’n Fun’s mission is to preserve and enhance the future of flight through world-class events, inspiring and educating people of all ages. Sun ‘n Fun Radio broadcasts locally on 1510 AM and audio streams worldwide from LiveATC.net.

Sun ‘n Fun was created in 1974 by a small group of aviation enthusiasts and has grown into the second largest event of its kind in the world. The six-day event is held on 2,200 acres at Lakeland Linder Regional Airport in Lakeland, Florida and offers jet teams, aerospace-related exhibits; educational forums, aircraft static displays, professional gatherings of aviation and economic development groups; daily and evening airshows, youth activities, a veterans plaza, and women in aviation arena. Many performers mingle on the grounds with vendors and students.

Cirrus Aircraft Vision Jet to be Awarded the 2017 Collier Trophy

After 5 Deaths In 2 Days, US Military Aviation Is In A Full-Blown Crisis

With 16 service members killed in air crashes, top lawmaker says ‘readiness of the military is at a crisis point’

A number of US service members have been killed recently in noncombat-related air crashes. Are there common threads?

In a leaked audio recording, CEO, Alan Joyce said that under “Project Sunrise,” Qantas would like to offer direct flights from Sydney and Melbourne to London. But he also described using the cargo hold space for berths like you’d see on a train or spaces for walking around.

Max Trescott makes a  cross-country flight in a Cirrus.

Mom praises TSA at Indianapolis airport in viral post: ‘She treated him like a person with feelings’

Word of the day: snarge.