A new airline from the founder of Jetblue, a proposed change to flight training regulations for experimental light-sport aircraft, the devastation to Tyndall AFB as a result of hurricane Michael, Bombardier’s lawsuit against Mitsubishi, a helicopter passenger saves the day when the pilot passes out, and the Lion Air fatal accident. Also, interviews from the Great Pacific Airshow at Huntington Beach, California and the EAA Chapter 141 Stick ‘n Rudda Fall Fly-In and Poker Run.

JetBlue founder David Neeleman’s new airline should start flying in 2021 and probably won’t be named Moxy, Brazil’s Azul will feed traffic to the new airline, it will fly hundreds of routes, including from the U.S. to Europe and South America. Neeleman will be using the A220-300 for long range and lower maintenance and operating costs. Customer interaction will be through an app.

Under a letter of deviation authority (LODA) the FAA proposed a change that would allow flight training in experimental light sport aircraft (E-LSA) to be conducted for compensation or hire.

Hurricane Michael made a direct hit on Tyndall Air Force Base, home to 55 F-22 Raptors. Some made it out, some did not. Also damaged were QF-16 target drones and contractor Mu-2s.

During a sightseeing flight in Hawaii, a newly engaged couple found their pilot had slumped over. As the Robinson R-44 began a dive, the man sitting in the back yelled to his fiancé to “pull up!” She did, which arrested the fall enough that they survived.

An airplane operated by The Indonesian low-cost airline Lion Air crashed into the sea 13 minutes after takeoff from Jakarta. All passengers and crew onboard are missing and presumed dead. Flightradar24 showed the 737 reached an altitude of about 5,500ft before a rapid descent.

At the Great Pacific Airshow in Huntington Beach, California (October 19-21, 2018) contributing editor-at-large, Brian Coleman spoke with representatives of airshow sponsors FedEx and the Lyon Air Museum. He also caught up with aviation attorney and former guest of the show Ray Johnson, as well as some very enthusiastic fans of aviation and the Thunderbirds. 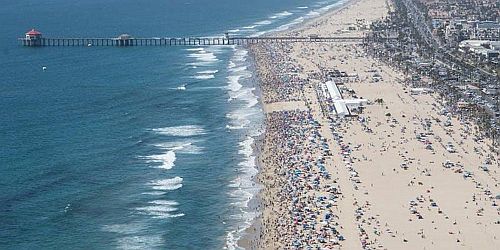 Our Main(e) Man Micah gives us a report from the EAA Chapter 141 Stick ‘n Rudda Fall Fly-In and Poker Run.