Sky Kids is a project that puts children with special needs and disabilities in general aviation aircraft to give them confidence and self-esteem. In the news, Airbus announces that A380 production will cease, Southwest Airlines declares an “operations emergency” concerning aircraft maintenance, Southwest is also conducting certification flights for routes to Hawaii, and Icon A5 demo flights spark calls to emergency dispatch.

Claire Schindler is the event coordinator for Sky Kids California. Sky Kids originated in Goodyear, Arizona with Bill Antonucci, his wife, and friends. They created a day to give children with special needs and disabilities the opportunity to fly a general aviation aircraft, free of charge. The event gives these children and their families the chance to have a fun-filled day and just be a kid. The event typically includes a full lunch buffet, clowns and face painting, and firefighters and police presence. The hope is that Sky Kids will give these children something to look back on for many years to come.

Sky Kids was so popular and successful in Arizona that it morphed into two events: in Scottsdale, Arizona in November and in Goodyear, Arizona in April.

Along with some friends, Claire volunteered at the Sky Kids event in Scottsdale and is now working to create a Sky Kids event in California. Planned for September 14, 2019, at Chino Airport (KCNO), Threshold Aviation will host the event at their FBO.

Claire attended Embry-Riddle Aeronautical University in Prescott, Arizona from 2013 to 2017. While there she served as president of the local chapter of Women in Aviation International (WAI), and participated in many community service events.

After graduating, Claire started her first flying job at a company called Chalk 2 Inc which involved chasing UAVs and working toward her CFI. After earning her hours, Claire was hired at her dream job flying the Falcon 7X for a private charter company. 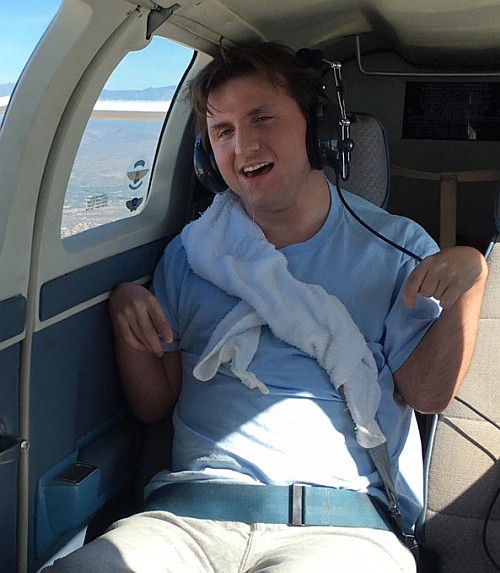 Airbus announced It will end production of the A380 by 2021. Emirates, the largest A380 customer, has reduced its open order of A380 aircraft and will instead purchase A330neo and A350 airplanes. The total number of A380 deliveries is expected to be just over 250.

See Ian Bott’s illustration on the demise of the era of the four-engined superjumbo.

Southwest Airlines has had to remove airplanes from service and declared an “operational emergency,” The company told its mechanics that those who call in sick will need a detailed doctor’s note when they return to work. Southwest has been in lengthy contract talks with its mechanics represented by the Aircraft Mechanics Fraternal Association.

Meanwhile, a Southwest Airlines spokesperson confirms the airline “…is slated to perform a long-range navigation and communication validation flight from Oakland to Honolulu.” Southwest started the FAA certification process in late 2017 and these proving flights are one of the last steps for Southwest in the FAA’s ETOPS (Extended-range Twin-engine Operational Performance Standards) certification process. Southwest already has a landing page for the service to come.

The amphibious Icon A5 is said to be for “adventure flying,” but witnesses to a demo flight called first responders.