We look at the airline cabin environment, cameras in seatback IFE systems, Alaska Airlines and Sisters of the Skies working for more industry diversity, bringing a gun on a plane, the Amazon Prime Air B767 crash, a new drone marking requirement, and the winners of the Chicken Wings comics giveaway. 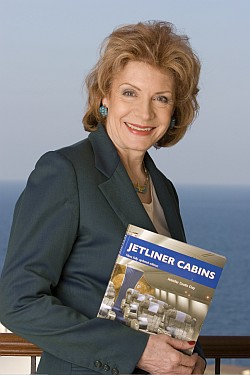 Jennifer Coutts Clay is the principal of J. Clay Consulting, a consultancy based on over four decades of pioneering work in the airline industry. Jennifer is also the author of Jetliner Cabins: Evolution and Innovation which examines the history, evolution, and development of airline cabin interiors in great detail.

In our conversation, Jennifer explains airline considerations for seller-furnished or buyer-furnished equipment. We explore “trickle down product upgrades” from first class to business to coach, and what that means for the future of first class. Jennifer also explains how corporate travel departments have indirectly affected cabin design and fare structures, and the importance of minor miscellaneous items (MMI) to the passenger experience. We also discuss slimline seats, green cabin design, and future trends. Jennifer also gives us her perspective on the impacts of the Boeing 747 and the Concorde, both iconic aircraft.

At British Airways, Jennifer was the first woman to serve as Head of Operations and Sales for the Western US. After serving as the General Manager of Product Design and Development at Pan American World Airways for three years in the late 1980s, Jennifer became a consultant and now provides technical advice and marketing support to the aviation industry, with a focus on airline interior and corporate branding programs.

Jennifer has been featured, interviewed, and published by dozens of news media outlets, including The New York Times, Travel + Leisure, Bloomberg Businessweek, Forbes.com, Conde Nast Traveler, and CNN.com. She is a founding sponsor of the Crystal Cabin Awards, a founding member of the Pan American Historical Foundation Museum, and she serves on the Concorde Advisory Committee at the Intrepid Sea, Air and Space Museum in New York City.

Jetliner Cabins: Evolution and Innovation is available as an eBook from Amazon, the Apple App Store, and Google Play. 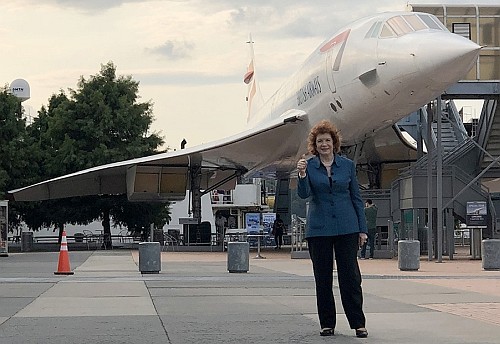 Jennifer Coutts Clay and the Concorde.

Seat-back entertainment systems on some American, United, and Singapore Airlines planes have cameras. All three airlines have said those cameras are part of the IFE systems from suppliers such as Panasonic and Thales. The airlines say the cameras are not activated and they have no plans to do so.

The travel industry is dominated by white males, and Alaska Airlines has committed to hiring more African American female pilots. The airline has teamed up with the nonprofit Sisters of the Skies organization to sign a pledge promising to hire more Black woman pilots to its ranks.

According to Sisters of the Skies, “Currently, there are less than 150 black women pilots in the United States holding Airline Transport Pilot, Commercial, Military, and or Certified Flight Instructor Licenses.”

The man was traveling on a United flight with a properly checked gun. But the flight was delayed and the gun flew on a different plane. Apparently, when it did arrive, it sat on the baggage carousel for some time and was then stolen.

For information about flying with a firearm, see 9 Must Do Tips for Flying with a Gun on Gun Goals, a site dedicated to gun enthusiasts.

An Amazon Prime Air B767-300 operated by Atlas Air crashed in Trinity Bay near Anahuac, Texas. The plane was flying from Miami to Houston’s George Bush Intercontinental Airport. All three on board were lost.

Effective immediately, drone operators must display their aircraft registration number on the outside of the drone. Previously, the number could be located inside a component, like in the battery case.

Chicken Wings Comics – We announce the two winners of the book giveaway. Thanks to all who entered, and to Michael and Stefan Strasser at Chicken Wings for donating and autographing the books.