The president and CEO of Aerox Aviation Oxygen Systems explains the role of onboard aviation oxygen and gives us an update on the New England Air Museum and Patient Airlift Services. In the news, current industry troubles are having impacts on flight safety, a Twin Otter and an MV-22 Osprey meet on the tarmac, a lawsuit is filed over the October 2019 fatal crash of a Collings Foundation B-17G bomber, and a Senate bill might change Air Force plans to retire some legacy aircraft.

Scott E. Ashton is president and CEO of Aerox Aviation Oxygen Systems, which designs and manufactures aviation oxygen systems and accessories. Scott is an aerospace industry executive with more than 25 years of experience working for such leading companies as Sikorsky, General Electric, and Goodrich.

Scott describes the types of aviation oxygen systems and their importance to pilots for safety and comfort. We look at the associated accessories, such as cannula, masks, and the regulators that need to be assembled without the presence of any oil or petroleum products. Scott talks about steel vs. Kevlar oxygen bottles, pressure test requirements, lifespan, and refilling.

Scott currently serves as the president and board member of the New England Air Museum, based in Hartford, Connecticut. He tells us about the gradual re-opening process, starting with outside exhibits and open hangar doors, leading up to the opening of the indoor exhibits. A new women in aviation exhibit is being constructed, and a Redbird flight simulator is coming to augment the STEM program.

Scott is also on the Board of Patient Airlift Services, a charitable organization that arranges private air transportation at no cost for individuals requiring medical diagnosis, treatment or follow-up, and for humanitarian purposes. That operation was temporarily shut down during the pandemic.

Scott began his career at General Electric as an engineer and served in both engineering and business development capacities in both GE Aircraft Engines and Corporate Aircraft Finance.

In 2011 Scott became the president of Sikorsky’s helicopter fractional ownership and MRO business, Associated Aircraft Group (AAG). In 2018 he shifted his career to entrepreneurship and joined a small family-owned repair station as president (Corporate Services Supply & Manufacturing) specializing in the repair and overhaul of corporate aircraft and helicopter engine and airframe accessories. In 2020, Scott purchased Aerox Aviation Oxygen Systems and became president and CEO.

Scott is an ATP and has ratings in airplanes, seaplanes, gliders, helicopters, and is a Certificated Flight Instructor, with more than 2,600 hours of flight time.

In May 2020, the Commercial Aviation Safety Team (CAST) issued more than 50 warnings to carriers about things that need to be watched carefully. The pandemic-inspired industry turmoil has opened opportunities for safety lapses.

CAST was founded in 1997 to develop an integrated, data-driven strategy to reduce the commercial aviation fatality risk in the United States and promote new Government and industry safety initiatives throughout the world.

The organization includes members from the FAA, NASA, Transport Canada, the unions (ALPA, NATCA, APA), and industry (airframers, A4A, ACI-NA, GE Aviation), as well as observers (EASA, IATA, ICAO, NTSB) and others. CAST aims to reduce the U.S. commercial fatality risk by 50 percent from 2010 to 2025.

On May 30, 2020, a DHC-6 Twin Otter and a USMC MV-22 Osprey collided on the ramp at Brown Field Municipal Airport, a California airfield close to the US-Mexico border. The Osprey had been on a training mission and parked at Brown. The Twin Otter started up and taxied under power into the MV-22. The Twin Otter’s right engine was left hanging from its mount. Both propellers were bent, and there was damage to the nose, right windscreen, and right windscreen frame. The Osprey’s left propeller was damaged, as was the left engine compartment, wing, and landing gear. The right engine propeller blade impacted the ground.

The Collings Foundation B-17G bomber crashed at Bradley International Airport in October 2019, killing seven people. A lawsuit has been filed by survivors and the families of those killed against the owners and operators. The 200-page lawsuit includes allegations such as:

In the Air Force’s fiscal 2021 budget request, the service proposed retiring a number of its B-1 bombers, A-10 Warthog attack planes, RQ-4 Global Hawk surveillance drones, KC-135 and KC-10 tankers, and C-130H planes. However, the Senate Armed Services Committee’s proposed FY21 National Defense Authorization Act limits the cuts proposed by the Air Force.  The SASC’s defense bill “establishes a minimum number of aircraft for each major mission area … and prohibits the divestment of aircraft until the minima are reached to ensure that Air Force can meet [National Defense Strategy] and combatant command requirements,” SASC said in a summary of the bill.

Who is that masked man?… 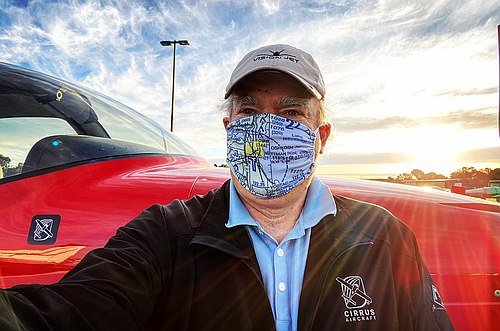