Join the Airplane Geeks and friends on Ustream Sunday, January 31 at 8:00pm Eastern for Aviation Jetpardy!

This game show, similar to the Jeopardy you see on TV, will feature three great contestants:

Brett Snyder –  The Cranky Flier and the Cranky Concierge, @crankyflier on Twitter. 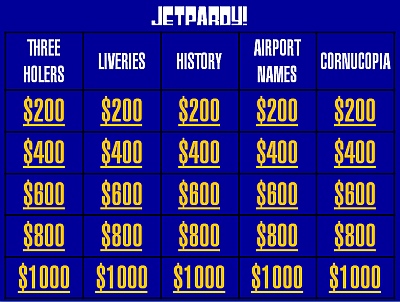 Benet Wilson from AviationWeek will play the Alex Trebek role. Steve Frischling, who supplied the questions answers will be judging. Rob Mark, Dan Webb, and David Vanderhoof will be assisting, and Max Flight will try and keep all the audio and video feeds working.

Here’s what you do:

At 8:00, simply visit http://www.ustream.tv/channel/airplane-geeks. That will get you into Ustream.tv where you can watch the game board and listen to the contestants compete to see who really knows their aviation stuff.

The contestents are three respected guys who know aviation. You’ve heard them on the podcast. (OK, not Phil yet, but he’ll be on soon.) You’ve visited their sites, read their stuff, seen their Tweets. But which one will take home the prize at the end of the show?

This is event is guaranteed to to be fun. It might even work. Be sure to join us to find out!