The fascinating development and operational history of the B-1 BONE bomber, certifying the last models of the 737 Max, the Air Force Next Generation Air Dominance fighter (NGAD), Germany selects its heavy-lift helicopter, piloting an A330 while sleeping, prison time for an unruly passenger, and staff shortages impact service at European airports

Kenneth P. Katz recently published his book titled The Supersonic BONE: A Development and Operational History of the B-1 Bomber. Highly researched with rich technical data and photographs, the book describes the fascinating history of the B-1 BONE, which turned out to be a very different aircraft from what it was originally intended to be.

Ken explains how changing military technology and strategy, political imperatives, and the evolving nature of external threats all impacted U.S. bomber strategy. The B-1A was transformed into the B-1B with 100 copies built and is still in service.

Where to buy The Supersonic BONE:

Ken is a long-time airplane geek. He was educated in aerospace engineering at the Massachusetts Institute of Technology and the University of Michigan. Ken has over three decades of experience as a US Air Force officer, flight test engineer, and project manager, and is currently employed as a staff project engineer for a major aerospace contractor.

Ken has a commercial pilot certificate with instrument rating, and flight experience as an observer and crewmember in over 20 types of military aircraft. He’s a senior member of the Society of Flight Test Engineers.

Inside the Convoluted Politics of Certifying the Last 737 Max Models

If the last two 737 Max derivatives (the Max 10 and Max 7) aren’t certified by the end of 2022, Boeing will have a significant problem with the cockpits on those airplanes. Section 116 of the Aircraft Certification, Safety, and Accountability Act [PDF] signed in December 2020 prohibits the certification of any transport category aircraft that lacks “a flight crew alerting system that, at a minimum, displays and differentiates among warnings, cautions, and advisories, and includes functions to assist the flight crew in prioritizing corrective actions and responding to systems failures…” and “…any system safety assessment with respect to the Boeing 737-7, 737-8, 737-9, and 737-10 airplanes… is conducted in accordance with [this requirement].

The Air Force Next Generation Air Dominance (NGAD) fighter is shaping up as more than just one airplane. It’s a family of systems that include new weapons, sensors, and drones that operate with the new fighter. The highly classified 6th generation fighter is now confirmed to be in the development phase.

Germany is expected to purchase up to 60 Boeing CH-47F Chinook helicopters in a deal valued at about €4 billion ($4.3 billion). These will replace the current Sikorsky CH-53G helicopter fleet. Delivery reportedly takes place between 2023 and 2029 although the agreement has not yet been finalized.

Both Pilots Flew the Airbus A330 Asleep

This past May, pilots on an ITA Airways A330-200 failed to maintain ATC communication for about 10 minutes as they allegedly slept at cruise altitude. The plane was operated by autopilot at the time. The first officer was at “controlled rest.” Italian media reports that the captain was dismissed, but he says he was not sleeping and there was a radio communication failure.

British airports claim they have 40,000 job vacancies. Ryanair’s Michael O’Leary said that “defence personnel with experience providing security” should be called in for “three to four months” to with the travel disruption that has resulted. Author, media personality, and aviation expert Julian Bray thinks military personnel may be required for six months.

Innovations in Flight – Outdoor Aviation Display at the Smithsonian National Air & Space Museum June 18, 2022, 10:00 am to 3:00 pm at the Steven F. Udvar-Hazy Center in Chantilly, Virginia.

Into Flight Once More –  Brings the history of June 6, 1944, to the present through the lens of one squadron and their epic recreation journey across the North Atlantic to Normandy for the 75th Anniversary of D-Day.

In 1994, Lt. Carey Lohrenz, U.S. Navy, retired, became one of the first women to fly the F-14 Tomcat… This is a story that has had generational impact and continues to inspire women in the armed forces and beyond: Video: Flying an F-14 ‘I Can’t Believe It Was Legal’

This report by Sam Abuelsamid provides an overview of the assistive and automated driving technology landscape including the steps these systems take and how distance and trajectory are measured by various sensor types. 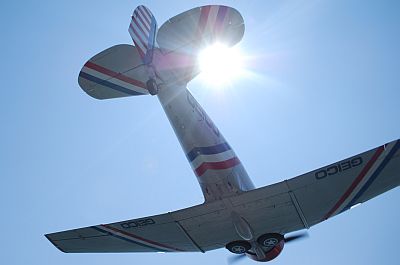