Highlights from NBAA-BACE, including the HondaJet 2600 Concept Light Jet, Cirrus Vision Jet, and Diamond all-electric trainer. Also, a KC-46 tanker update, airline ticket refunds, FA smuggling, a passenger who was not a terrorist, an Australia News Desk report, and a story from our Main(e) Man Micah.

Highlights from the 2021 edition of the NBAA-BACE from the National Business Aviation Association.

Honda displayed a mockup of the HondaJet 2600 Concept that will feature a transcontinental range of 2,625 nm. Honda Aircraft president and CEO Michimasa Fujino:

“New conditions in the business aviation industry have signaled the need for rapid cross-country travel and the ability to carry more passengers and payload and dire necessity of cutting carbon emissions. In response we developed the HondaJet 2600 Concept, which delivers a transcontinental range of 2,625 nautical miles, with seating for up to 11 occupants.”

The Diamond Aircraft eDA40 will be targeted to flight school training fleets. First flight is planned for the second quarter of 2022 with certification following in 2023. The EDA40 is expected to have about a 90-minute flight time and a recharge turnaround time of about 20 minutes, said Heikenwälder.

The Air Mobility Command has cleared KC-46A tankers for air-to-air refueling using the boom. This is the third “interim capability release”

The 57-year-old head purser was arrested in Argentina on suspicion of trying to smuggle the loot on a flight from Buenos Aires to Miami. Her luggage contained 2,204 grams of gold, Rolex watches, other jewelry, thousands of Pesos, and US$ 11,413.33. The flight attendant is accused of smuggling and money laundering.

American Airlines Flight 4817, from Indianapolis to LaGuardia, made an emergency landing and emergency slide evacuation after a woman accused another passenger of having a bomb. The “terrorist” was simply watching vintage camera videos and handling his own old camera.

Steve and Grant bring news from Down Under:

Stereotypes on the Q400 – Reprise

A story from our Main(e) Man Micah.

We talk with an Airbus captain and former military pilot. In the news, a charter flight runs out of fuel and crashes, first delivery of the Bombardier CS300, an airline pilot suffers a heart attack, managing massive amounts of aviation data, charging for overhead bins, an autopilot system for general aviation, and a big pay raise for Delta pilots. Also, flying the Diamond DA42NG, and remembering December 7, 1941 and the 75th anniversary of that day. 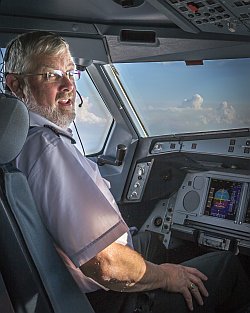 Captain Nick Anderson always wanted to be an airline pilot. He joined the Air Cadets at age 13, went solo in a glider at 17, gained a flying scholarship at age 18 and earned a Private Pilot’s Licence.  Capt. Nick joined the RAF at age 21 and trained on the Chipmunk, Jet Provost, Folland Gnat, and Hawker Hunter.  He then streamed to fighters and posted to No 43 (F) Sqn, The Fighting Cocks, flying the F4 Phantom FG1.

During a 19 year career, Capt. Nick moved from the Phantom to the Hawk T1 trainer as an A1 fast jet Qualified Flying Instructor, then back to the Phantom to become a Qualified Weapons Instructor.  He then moved to Australia on an exchange tour flying the F/A 18 for the No 77 Sqn RAAF, and finally back to the UK to fly the Panavia F3 Tornado Air Defence Variant.

After obtaining his Air Transport Pilot’s Licence and leaving the military, Capt. Nick joined an airline, flying the Airbus A340-300, Airbus A340-600, and the Airbus A330-300 on long haul flights.

Currently, you can hear Capt. Nick and his Plane Tails segment on the Airline Pilot Guy podcast with Captain Jeff, Dr. Steph, and Miami Rick. Find Capt. Nick on Twitter, Facebook, and at his website Nick Anderson Photographic.

Not Enough Fuel: The Disgusting Truth About LaMia Flight 2933

LaMia charter flight 2933 from Santa Cruz de la Sierra in Bolivia to Medellín in Colombia crashed November 28, 2016, killing 71 of the 68 passengers and 9 crew. Apparently, the Avro RJ-85 did not have sufficient fuel for the route flown.

Exclusive: On Board the Delivery Flight of the first CS300 to airBaltic

airBaltic, the national airline of Latvia, became the first airline to take delivery of the Bombardier CS300. Commercial operations are set to begin December 14, 2016.

The captain of a KLM flight about to leave Glasgow for Amsterdam suffered a heart attack as the plane taxied to the runway. The crew and a passenger resuscitated the pilot. He was listed in stable condition at the hospital.

United Airlines has a new ticket option called “Basic Economy,” which allows passengers to bring only one small item on board, which must fit under the seat. Checked bags incur a fee.

The STC Group is leading a project to certify the Trio Pro Pilot autopilot system in Cessna 172 and 182 aircraft. This is a “two-axis system with full navigation capabilities, envelope protection, return-to-level and 180 degree turn features for unintended IMC encounters.”

Delta pilots get 30 percent raise by 2019 in new contract

Eighty two percent of the pilots voting have ratified a new four-year contract, retroactive to the beginning of 2016. Delta’s 13,000 pilots get an immediate 18% pay raise, and a cumulative 30% percent by Jan. 1, 2019.

Remembering December 7, 1941, the 75th anniversary of the day that will live in Infamy, and a few of the people who were there: Lt. Phillip Rasmussen and his P-36A, P-40 Pilots George Welsh and Kenneth M. Taylor, Nakajima B5N2 “Kate” pilot Mitsuo Fuchida.

Diamond DA42NG – Max Trescott has been flying a new Diamond and tells us his reaction.

12 Planes of Christmas – An online giving campaign from the Commemorative Air Force.

Shark US – VLOG 1 – Cheese Burgers and Milkshakes at the Robin’s Nest Flying the Shark US to the Robin’s Nest Cafe at Shannon Airport (KEZF) in Fredericksburg, Virginia for a “$100 hamburger.”

The RV-4 VH-NOJ Jon Johanssen flew around the world is now preserved at the South Australian Aviation Museum.

Air Tractors in action as water bombers during a bad bushfire north of Adelaide South Australia during November 2015.