A symposium celebrating the formation of NACA 100 years ago, an AirAsia Flight 8501 update, slimline seats and passenger comfort, how to deboard quickly, and a Mars rover equipped with a drone.

Dr. Bill Barry is NASA’s sixth Chief Historian. Prior to his appointment in September 2010, Bill served as the NASA European Representative at the United States Embassy in Paris and at NASA Headquarters as a Senior International Programs Specialist and leader of the Russia Team in the Office of External Relations.

Bill is a graduate of the United States Air Force Academy, he also holds a Masters Degree from Stanford University and a Doctorate from Oxford University. He’s a pilot who holds a commercial, instrument ticket for multi-engine land and glider and is (oddly enough) currently working on his single engine rating.

Bill is one of the organizers of The NACA Centenary: A Symposium on 100 Years of Aerospace Research and Development to be held at the National Air & Space Museum in Washington, D.C.  on March 3-4, 2015.

Congress established the National Advisory Committee for Aeronautics (NACA) on March 3, 1915. In 1958, NACA was transitioned and become NASA.

Find the NASA History Program Office at history.nasa.gov, and lots of great photos on Flickr.

Divers have retrieved some bodies from a section of fuselage that sits about 100 feet down in the Java Sea. Efforts to raise the fuselage have failed. Reports attribute the difficulty to deflating lifting balloons, snapped ropes around the fuselage, and even breakup of the fuselage.

United Airlines plans to grow capacity by 1.5% to 2.5% across its entire fleet, through a combination of new planes and new seats on old planes. The new seats are slimline seats. Installation on 300 aircraft gives United the equivalent capacity of 14 additional aircraft. Thinner seats mean you can fit more in with the same seat pitch. Or even more rows with slightly less seat pitch.

The way we get off airplanes makes absolutely no sense

Airlines try different boarding strategies. Sometimes to minimize total boarding time. Sometimes to support a passenger differentiation strategy. But what about at the other end of the trip? The 2014 study “Structured deplaning via simulation and optimization” showed that deboarding by aisle rather than row could cut time by up to 35%.

These days two things are red hot: Mars rovers and drones. The rovers are accomplishing great science and sending us amazing photographs. Drones seem to be showing up everywhere, and are also creating fantastic images. So what if you had a Mars rover that came with its own drone? 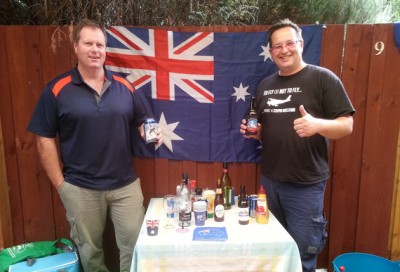 It’s Australia Day and the boys are taking a few minutes out from a BBQ to record a quick OzDesk with mentions of special Australia Day items, including:

Report 5 by Juan Fernandez from McMurdo Bay in Antarctica. More at AirplaneGeeks.com.ice.