We talk with an Air Traffic Controller at London Heathrow who also acts as deputy manager of the ATC team for the RIAT airshow. In the news, FAA airworthiness directive permits the Boeing 737 MAX to return to service, Delta and tariffs on Airbus aircraft, Gatwick slot usage and planned labor action at Heathrow, speed dating in the air, Norwegian Air Shuttle troubles, autonomous airplane tugs, and a F/A-18C Hornet goes into the National Air & Space Museum.

Adam Spink has been an air traffic controller at the Heathrow Airport tower for 22 years. He’s also an instructor, examiner, and supervisor. Adam’s main job is in the Procedures and Development office working on new procedures and equipment.

Adam explains aircraft wake turbulence and the Time Based Separation (TBS) used at Heathrow to increase the aircraft landing rate, including the implications for air traffic controllers when planes are separated by time instead of by distance. See: New separation standard permanently adopted over the North Atlantic.

We also learn how the environmental aspects of aviation fit into key performance measures and controller metrics that include reduced emissions.

In addition to his job as a NATS controller at Heathrow, Adam acts as deputy manager of the ATC team for the Royal International Air Tattoo airshow (RIAT) held at RAF Fairford in the UK. He’s a member of the UK Air Transport Confidential Human Factors Incident Reporting Programme (the equivalent of NASA ASRS), and a member of various international working groups on low visibility ops, satellite-based navigation, and radar systems. Adam speaks about human factors at various medical school/medical university courses.

Southwest deploys team to bring 737 MAX jets out of desert

Southwest Airlines has 34 Boeing 737 MAX jets in storage in Victorville, California. The airline sent a team of mechanics to start the process of bringing its jets out of storage. 737 MAX flights at Southwest should resume the second quarter of 2021. There will be no re-booking charge for passengers who are uncomfortable flying on the MAX.

The European Union Aviation Safety Agency (EASA) executive director said the 737 MAX is safe to fly.  “We wanted to carry out a totally independent analysis of the safety of this aircraft, so we performed our own checks and flight tests. All these studies tell us that the 737 MAX can return to service. We have started to put in place all the measures. It is likely that in our case we will adopt the decisions, allowing it to return to service, sometime in January.”

As part of the Boeing/Airbus subsidy battle, tariffs were placed on European-built Airbus aircraft in October 2019. Delta has taken delivery of seven planes since then, but instead of flying them to the United States, the airline based them overseas, avoiding the tariff because they weren’t imports. In a statement to Bloomberg News, Delta said “We have made the decision not to import any new aircraft from Europe while these tariffs are in effect. Instead, we have opted to use the new aircraft exclusively for international service, which does not require importation.”

Until March 2020, European regulations required that an airline use 80% of its landing slots or they were lost. But because of the huge drop in travel demand, the rule was suspended for six months, then extended for another 6 months, to 27th March 2021. Gatwick airport wants the old slot rules reinstated before summer 2021.

Heathrow Staff To Strike For 4 Days In December

London’s Heathrow Airport wants to cut costs by reducing wages. The large Unite trade union says the airport plans to fire some 4,000 workers, then rehire them at lower wages. 85% of the union membership voted in favor of strikes in protest.

Taiwanese carrier EVA Air and travel experience company are offering flights called “Fly! Love Is In the Air!” Twenty men and twenty women will depart from Taipei, fly around the island for three hours, return to the airport, and pairs will then enjoy a two-hour date. Seating on the plane is by random draw, but mingling is allowed. Food is prepared by a Michelin-starred chef.

Norwegian Air Shuttle has filed for protection from creditors in Ireland.

Californian start-up Moonware says the aviation industry is stagnant. They want to do something about that. Moonware says they are “building an AI-powered fleet management network and subsequently deploying autonomous & electric vehicles to fundamentally reshape airport operations.” The company is developing a family of autonomous electrically powered tow tugs for aircraft ground handling.

The Smithsonian’s National Air and Space Museum has brought a Blue Angels’ F/A-18C Hornet BuNo 163439 into the collection. This is the first “Blue Angels” aircraft and the first F-18 the museum has acquired.

Save Whiteman airport, a change.org petition.

Dobbins Reservists Tie the Knot Aboard a C-130

Chino Airport Community Ambassador Bob Velker, an alternative to radar, smaller airline carry-on bags, an update on the A400M crash, shooting wildlife from a plane, and two airlines make a top 10 list that you don’t want to be on.

We talk with Bob about his role as the “community ambassador” for Chino Airport, one of the country’s largest general aviation airports and located in the County of San Bernardino, close to Los Angeles, Orange, and Riverside counties in Southern California.

His primary task is to dispel the notion that Chino Airport is a “gated community filled with rich boys and their toys.” More precisely, that Chino is a small business park with runways, made up of dozens of businesses, employing hundreds of people, and pouring millions of dollars into the local economy.

Bob tells us how he builds synergy for all the airport stakeholders: the developers, the community, the Planes of Fame Air Museum, area businesses, and the airport itself. He creates education and awareness programs that engage the community with the airport and help them see the important role the airport plays in the local economy. 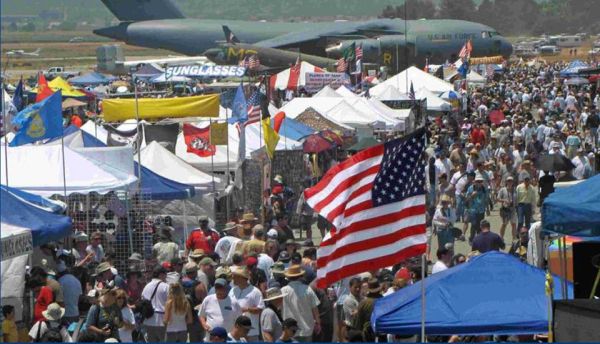 We also talk about the Planes of Fame Airshow and the notion of an “aerotropolis,” where an airport is in the center of a city which then grows around it, connecting workers, suppliers, executives, and goods to the global marketplace. Bob gives us a great example of how an airport can work with drone flyers for their mutual benefit.

Bob has been in-and-around Chino Airport for 18 years. He’s also a pilot, a businessman, a strategic planner, and a management consultant, plus, he says, a recovering engineer.

Bob is responsible for creating and maintaining the airport’s social media platform. Their website is ChinoAirport.org, and you can find them on Twitter, Facebook, and YouTube. The History of Chino Airport (formerly Cal Aero Field) is a video worth watching.

NATS, in conjunction with Thales ATM UK and Roke Manor, have been testing a system that uses standard TV signals to detect and direct aircraft.

At its annual meeting, IATA (The International Air Transport Association) proposed the Cabin OK program to try and standardize the size of cabin bags allowed by airlines.

On its webpage, IATA says, “…the current variety of policies among airlines can lead to frustration for passengers. Bags that do not correspond to the allowance are regularly checked in at the gate, which adds inconvenience for the traveller, slows down the boarding process, increases airline costs and occasionally delays flights.”

The bag size proposed by IATA is a little smaller than the standard size used by most U.S. carriers, including Delta, United, American, and Southwest.

On May 9, an Airbus A400M crashed near Spain’s Seville Airport. Four of six crew members were killed. A BBC source says investigators believe that when software was installed, the torque calibration parameters had accidentally been deleted, causing the ECU’s to fail to operate properly.

The pilot and a gunner were killed while attempting to shoot a coyote in northeastern New Mexico as part of the Wildlife Services program under the United States Department of Agriculture (USDA), Animal and Plant Health Inspection Service (APHIS).

According to the USDA, Wildlife Services resolves “wildlife conflicts to allow people and wildlife to coexist.” The Predator Defense organization takes a dim view of the USDA methodology, but nonetheless the Wildlife Services use of aerial gunning has led to a number of accidents and deaths.

In order to prevent a Rob Mark moment on the Oz Desk, Grant has to pass Steve’s Breathalyzer test before he can join in reporting on:

Rob Mark has been watching the growth of commercial and hobby drone use, and provides his thoughts on some of the technology being employed.