We talk with Ellie Carter, Britain’s youngest solo glider pilot, and youngest single-engined PPL holder. Ellie has a passion for helping youngsters in aviation. In the news, the possibility of just one pilot on the flight deck for long haul flights, Airbus eyes an A350 freighter derivative, airlines struggle to meet the growing travel demand, a unique checked baggage item, a delay and possible price increase for the new Air Force One planes, the U.S. Air Force wants to know who would bid on a contract for the KC-Y bridge tanker, and an open rotor engine.

Pieter Johnson welcomes Ellie Carter to Across The Pond. At age 14, Ellie became Britain’s youngest solo glider pilot and later went on to become Britain’s Youngest single-engined PPL holder, having soloed at 16. She is currently qualifying for her aerobatic and IFR ratings.

A STEM ambassador and Chair of the Light Aircraft Association’s Youth and Education Support Strut, Ellie has a passion for helping youngsters into aviation and has just completed her A-Level exams specializing in maths.

Ellie has been awarded the British Women’s Pilots Association, Hilda Hewitt Trophy, for her actions and her example, being an inspiration to her peer group. Most recently Ellie was awarded the Light Aircraft Association’s President’s Breitling Certificate for her work in promoting younger people in aviation.

Find Ellie on social media: Twitter, Instagram, and at the Youth Education branch of the Light Aircraft Association. Pieter can be found on Twitter and Aviation Xtended.

Cathay working with Airbus on single-pilot system for long-haul

Airbus Set to Move Ahead With A350 Freighter Within Weeks

Airbus is interested in competing in a market dominated by Boeing, and will reportedly be seeking board approval to proceed with an A350-based freighter. The modified A350-900 might be slightly longer than the passenger version and take four to five years from the launch date to enter service.

Travel demand is going up in the U.S. and American Airlines wants to be ready. A company memo is asking non-union employees to volunteer their help at Dallas/Fort Worth International Airport. The corporate scheduling, planning, and communications workers are being asked to work unpaid 6-hour shifts helping travelers in international terminals and other tasks.

College student gets $20 to check pool noodle on Southwest flight

It started as a bet. The airline’s response is notable.

Boeing has notified the US Air Force that the two 747-8 Air Force One aircraft could cost more than the $3.9 billion previously agreed to, and the planes could be delivered a year late, in 2025.

The U.S. Air Force posted a Contracting Opportunity for new tankers. The “Sources Sought” request is “to determine if there exists an adequate number of qualified interested contractors capable of providing solutions to meet the requirement. The Government may use the responses to this Sources Sought for information and planning purposes.” The Air Force is looking for companies that can deliver approximately 140-160 Commercial Derivative Tanker Aircraft—at a rate of 12 to 15 per year—to supplement the Air Force Tanker Aircraft fleet at the end of KC-46A production, and bridge the gap to the next Tanker recapitalization phase.

A CFM design looks to address the noise issues of past oper rotor (or unducted fan) turbine engines.

Vertical Aerospace is an electric vertical take-off and landing aircraft (eVTOL) startup based in the UK. The company announced pre-orders for up to 1,000 of its electric VA-X4 vertical takeoff aircraft. American Airlines ordered between 250 and 350 aircraft, Virgin Atlantic ordered between 50 and 150, and aircraft leasing group Avolon ordered 310.

The VA-X4 seats 4 PAX and a pilot, with commercial flights expected in 2024. The aircraft can cruise at 202 mph, has a usable range of up to 120 miles, and is claimed to be 100x quieter than a helicopter thanks to the VA-X4’s distributed propulsion system.

The Women Take Flight event at the New England Air Museum was held March 9, 2019, to commemorate Women’s History Month and in conjunction with Women of Aviation Worldwide Week. Visitors of all ages celebrated women’s contributions to aerospace history through a variety of hands-on activities, special events, and guest lecturers.

In addition to the lectures, Women Take Flight offered visitors the opportunity to meet women pilots, engineers, and industry professionals who were set up at tables throughout the museum. Airplane Geeks was there to capture interviews.

Leah is a senior at a girl’s high school participating in the year-long Sikorsky STEM challenge with a project to modernize cockpit control mechanisms. [Starts at 1:36]

Mary Ann Cannon is Vice President of Commercial Engine Programs at Pratt and Whitney. She has had a 30-year career at Pratt, and was one of the guest speakers. [Starts at 7:39]

The Ninety-Nines were at the event in force and we spoke with Glenna Blackwell and Lori Plourd. Glenna is from the Connecticut Chapter of the Ninety-Nines. [Starts at 14:51]

Former Air Force pilot Kristi Fleischmann is from Acrojet, which provides in-aircraft training for professional and high-performance aircraft pilots. The company is now actively trying to address the pilot shortage by creating and presenting STEM in aviation programs for students at the middle and high school level. [Starts at 29:09]

Debbie Reed is the newly appointed executive director of the New England Air Museum. We talk about the museum, the employees and volunteers, restoration activities, and the programs and events this year. [Starts at 42:32]

University of Connecticut senior Alexis Coppola and Assistant Professor Dianyun Zhang from the Department of Mechanical Engineering talked with us about composites in aviation. [Starts at 56:20]

Shaesta Waiz flew around the world solo in a Beechcraft Bonanza. She has an interesting history and a strong drive to shape the future for girls and young women in aviation and STEM. She’s the founder and president of Dreams Soar, Inc. [Starts at 1:05:02] 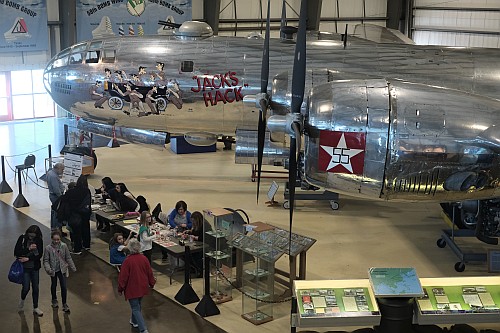 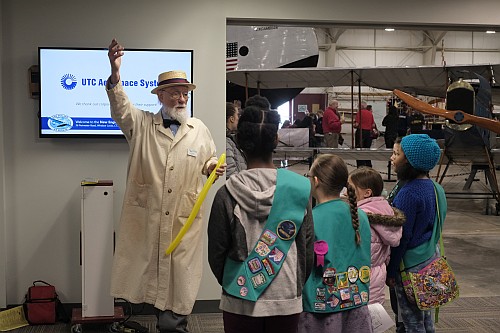 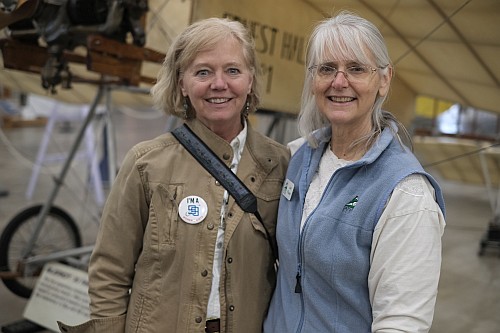 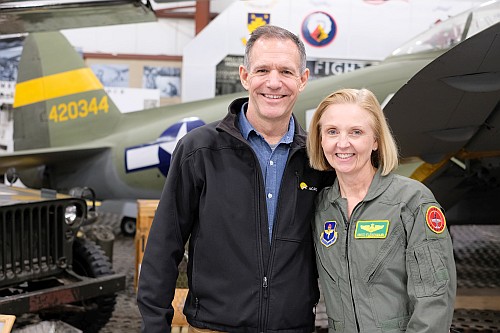 Kristi Fleischmann and her husband, both pilots! 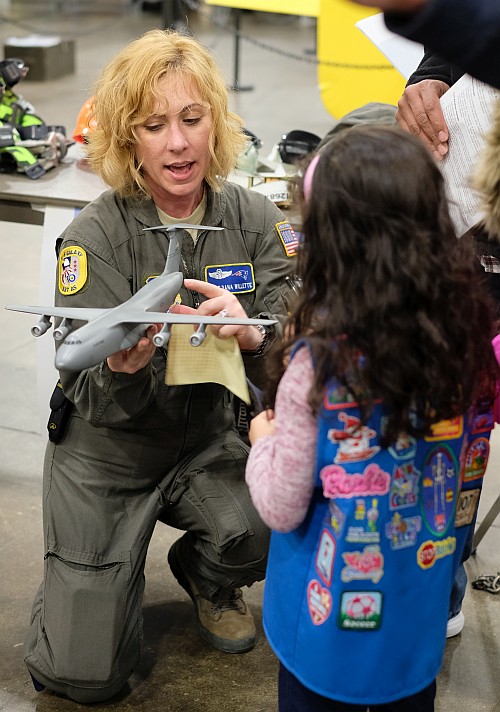 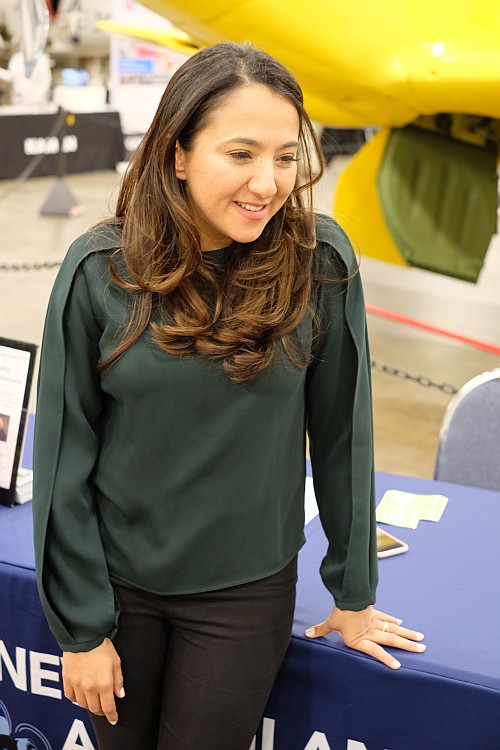 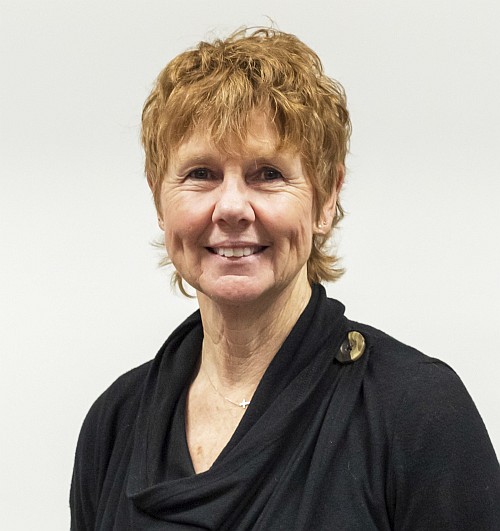 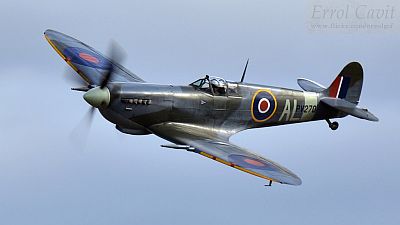 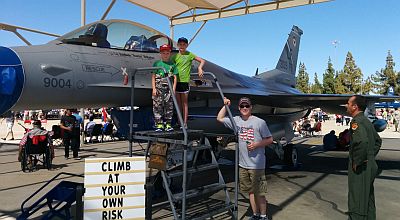