We talk about about the USA Today general aviation safety report, airline social media strategy, the youngest person to circumnavigate Australia solo, something new in the search for MH 370, the airline market in Scandinavia, and carbon airplane brakes.

Bernie Leighton travels around the world in search of aircraft to learn about, experience, and photograph. He’s been obsessed with Russian aviation in particular since he was very young. Bernie writes his stories for AirlineReporter.com.

Bernie will go anywhere to fly on anything. He spent four years in Australia learning about how to run an airline, while putting his learning into practice by mileage running around the world. You can usually find Bernie in his natural habitat: an airport.

We talk with Bernie about some of the interesting planes he’s found and even flown on, how he selects his destinations, and photography (his collection is on Flickr). We also learn about Russian ekranoplan ground effect aircraft and where you can get your own small passenger ekranoplan, the  Aquaglide  from the Russian Arctic Trade and Transport Company. They have a video library of photographs.

Bernie has flown in a Genex AN-26 in Belarus in Eastern Europe, landing with a cargo door stuck open. He characterizes flying in Russia like this: the Russian aviation  culture is operational practicality with a respect for safety, versus Western devotion to safety at the expense of operations.

In the past five decades, almost 45,000 people have been killed in private planes and helicopters. Investigations have said pilots caused or at least contributed to 86% of those accidents.USA Today says their investigation shows that many accidents are caused by defective parts and dangerous designs, and manufacturers have covered up problems and lied to regulators.

Airlines: Is a Customer Service Mindset at Odds with a Social Media Culture?

Marisa Garcia writes about the airline passenger experience in her Flight Chic blog. In this post, she blogs about a discussion of airline social media strategy at the SITA IT Summit in Brussels. American Airlines has built a large, very responsive social media culture that involves many employees at many levels. JetBlue Airways seems to favor more of a traditional, face-to-face customer support strategy.

The Cessna 336/337 O-2A  Skymaster. Cessna’s push-me-pull-me went from Air Taxi to director of air strikes in South East Asia. The aircraft’s chainsaw buzz brings back fond memories to both Rob and David.

This week the boys are chatting with Alex Fisher, a 17 year old who’s currently flying solo around Australia to raise funds for the Royal Flying Doctor Service and become the youngest person to circumnavigate Australia solo by aircraft in the process.

Rob tells us about the deleted files from the MH 370 pilot’s flight simulator.

This week Pieter returns to talk to Marisa Garcia about the airline market in Scandinavia. They discuss key airline and airport developments and focus on Norway. Marisa can be found at FlightChic.com.

This site for astronomy enthusiasts will let you find Iridium Flares, as well as lots of other information.

The remains of 17 people onboard the C-124 Globemaster which crashed in 1952 will be returned to their families.

This is a good post on why the FAA needs to get Unmanned Aerial System regulations right. 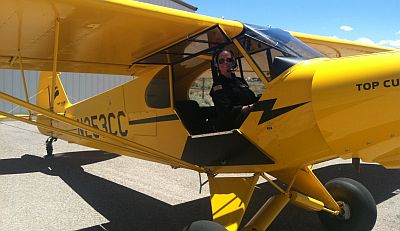 Jodi in a Top Cub