What to expect at EAA AirVenture Oshkosh 2019. In the news, we discuss a woman trapped in an airliner, crosswind testing in Iceland, the Boeing 737 MAX grounding, and the Paris Air Show. 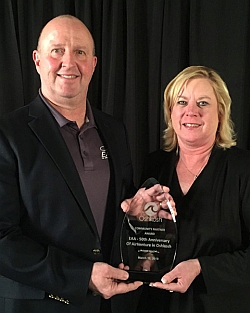 Dick Knapinski is the director of communications for the Experimental Aircraft Association (EAA). In this preview of EAA AirVenture Oshkosh, Dick explains that the July 22-28, 2019 event represents the 50th consecutive year in Oshkosh, and describes how EAA AirVenture has changed over time as well as what to expect in 2019.

This year is also the 50th anniversary of the landing on the moon and Apollo 11 command module pilot Michael Collins will be a featured guest. Burt Rutan and many of his aircraft designs will also be at Osh, along with air force demo teams and other performers.

The drone cage returns with demonstrations and hands-on opportunities. Urban air mobility (UAM) is getting increased attention from prominent aviation companies and startups and AirVenture will offer opportunities to discuss and explore that topic.

Dick explains that people come to Oshkosh (and come back year after year) for their own personal reasons, but the week-long event offers it all. He also has some tips for first-timers, both those flying in and those arriving by other means of transportation.

A Travel Nightmare: Waking Up Cold And Alone In A Darkened Plane

What do you do if you wake up after a flight to find yourself in a dark airplane parked away from the terminal? And how did this come to happen?

Did Collapse Of WOW Air Lead To Reinstatement Of Iceland Cross Wind Tests?

Crosswind testing at Keflavik International Airport was banned following the 2013 Sukhoi SSJ100 crash. Boeing and Airbus have wanted to resume certification testing in Iceland and may once again have the opportunity.

Scott Hamilton from Leeham Company believes Boeing executives have finally gotten serious about the 737 MAX and the company will bounce back. But could lower production rates lead to layoffs?

At the Paris Air Show, Airbus launched the A321XLR and Boeing announced a large 737 MAX order.

#PaxEx Podcast 67: Deciphering the messaging from Airbus and Boeing in Paris