An air cargo pilot joins us to talk about Boeing freighters. Also, the American Airlines recovery plan that includes more growth than that of other mainline carriers, an Allied Pilots Association proposal where the government would buy middle seats to facilitate social distancing in flight, a Lufthansa bailout by the German government, an Italian ban on luggage in overhead bins, changing airline contracts of carriage, and the United States Air Force plan for some F-22 Raptors.

Miami Rick flew 777 freighters with LAN and was also a passenger pilot on the 767 and 757. Several years ago he moved on to fly air cargo on the 747, including the 747-8 and the Dreamlifter. Rick recently transitioned from the right seat of the 747 to the left seat of the 767 freighter. Rick is a regular host on the Airline Pilot Guy Show where he refers to his current airline as “Acme-Giant.”

Adjusted for blocked middle seats, American Airlines is restoring 55% of domestic seat capacity in July, compared to 30% for United and 21% for Delta. American CEO Doug Parker said, “The big hubs win. We are absolutely benefitted by the fact that two of the three biggest hubs on earth are ours, which are Dallas/Fort Worth and Charlotte.”

Henry Harteveldt of Atmosphere Research Group said, “It’s a vacuum cleaner strategy. They just want to suck up whatever traffic is out there. It’s very risky but there’s a reward.”

United doesn’t buy American’s strategy, telling employees, “Some of our competitors are flying a bigger July schedule than we are, by selling extremely low-priced tickets, and wasting money.”

The Allied Pilots Association (APA) proposed that the government buy seats so that no passenger has to “sit next to a stranger.” The APA white paper Safe Essential Air Transportation Seating (SEATS) [PDF] states, “Under SEATS, the government would purchase enough seats on each flight to eliminate the need for any passenger to sit next to a stranger. Thanks to uniform social distancing, passengers would be encouraged to fly more, airlines would be encouraged to operate more flights, and the government would ensure the preservation of critical transportation infrastructure and associated jobs.”

Also, “…SEATS would build on the success of the CARES Act by addressing both economic and health concerns, with the pace of the airline industry’s recovery determining its duration and level of support. The SEATS concept could be an effective strategy standing alone, and could also be integrated with any forthcoming infrastructure or additional stimulus bill similar to the CARES Act.”

Lufthansa shareholders voted overwhelmingly to take a $10 billion bailout from the German government. The deal gives the government a 20% stake in the airline. Current shareholders will see the value of their holdings diluted. Billionaire businessman Heinz Hermann Thiele, Lufthansa’s biggest single stock owner, had been against the deal, saying the value of his own holding would drop 15%. But he relented at the 11th hour.

Cabin luggage ban on flights to and from Italy

All luggage is now banned from overhead bins on planes in Italy. Handbags and other items that fit under the seat in front are allowed. Everything else has to be checked. The Italian National Civil Aviation Authority (ENAC) says “as far as hand luggage is concerned, passengers are allowed to bring on board only luggage small enough to be placed under the seat in front of the assigned seat. For health reasons, the use of overhead lockers is not allowed under any circumstance.”

Airlines have canceled many flights due to COVID-19, and the Department of Transportation has warned them they must offer refunds to passengers when requested. Rather than offer passengers cash refunds, airlines have preferred to give them electronic vouchers or credits to be applied to future travel. The result has been a number of consumer lawsuits.

It is reported that American Airlines and British Airways recently revised their contracts of carriage. American’s contract of carriage requires customers to waive their right to participate in a class-action lawsuit against the airline. British Airways requires Executive Club loyalty program members to defer to binding arbitration rather than engage in lawsuits. Frontier and Spirit Airlines already had clauses in their contracts of carriage that prohibit class-action lawsuits.

The Air Combat Command wants to cut pilot training time. Gen. Mike Holmes, head of Air Combat Command, signed off on a strategy known as “Rebuilding the Forge,” or “Reforge.” earlier this month. Under the plan, the Air Force looks to reduce the time it takes to train a skilled fighter pilot to about 22 months, half of what it normally takes. They are looking to take some of the Formal Training Unit F-22s (which are used for fundamental skills training) and put them in a combat-coded configuration. With that, more aircraft would be available for pilots to get operational experience earlier in their careers.

Dawn Flight – Only if you love gliders, or really have nothing better to do. 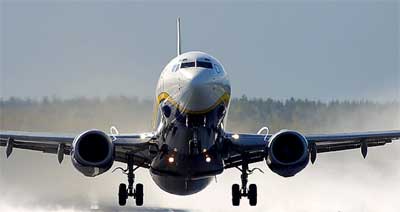 Max and Court are joined by Eddy Pieniazek from Ascend Worldwide. You’ll find the interview with Eddy, our famous word associations, as well as Max’s pick of the week.

Max’s pick of the week is Abandoned & Little-Known Airfields.