We discuss airline safety in light of the newly revised EU Air Safety List and claims by Horizon Air of a lax pilot safety culture. Also, free admission at EAA Airventure Oshkosh for youth 18 and under, layoffs coming to Textron, space-based ADS-B, and a load stability system for helicopters.

The EU Air Safety List details the countries and specific airlines that do not meet the airline safety standards of ICAO (the United Nations’ International Civil Aviation Organization). Entities on the list are banned from operating in the European Union or have operational restrictions within the EU. Banned from EU skies are 115 airlines, 109 of them in 15 states due to a lack of safety oversight by the aviation authorities in those states. For more on airline safety see:

Horizon Air warns about lax safety culture among its pilots

Horizon Air’s vice president of flight operations stated that the airline suffers under a lax safety culture among the airline’s pilots, writing in an email, “If we sit back and do nothing, we will have an accident. Nothing good can come of the trajectory we are currently on.”

EAA to Give Free Admission to Youth at AirVenture

Young people ages 18 and under will be admitted free to EAA AirVenture Oshkosh as a way to introduce more youth to the possibilities in the world of flight. The 68th annual Experimental Aircraft Association fly-in convention will be July 20-26, 2020 at Wittman Regional Airport. The Boeing Company is financially supporting this effort for the next two years to encourage more aviation-minded families and their children to attend the annual event that brings more than 10,000 aircraft from around the world to Oshkosh.

Textron Aviation announced upcoming layoffs under a restructuring plan and didn’t provide details on the size of the workforce reduction. But a Securities and Exchange Commission filing indicates that about 875 positions will be eliminated. The plan will “improve overall operating efficiency through headcount reductions, facility consolidations, and other actions.”

After His Search-And-Rescue Instructor Died On A Mountain, Caleb Carr, 25, Cofounded A Company To Help Stabilize Helicopter Baskets

When he was just 15 and training as a volunteer search-and-rescuer in Oregon, Caleb Carr’s instructor collapsed of an apparent heart attack. Due to high winds, the rescue helicopter could not put the swaying rescue basket through the dense tree cover and the instructor died on the mountain. Carr and Derek Sikora went on to found Vita Inclinata (Latin for “life by motion”) to provide autonomous helicopter load stability systems.

Rare 1954 Aerocar may fly off the auction block at Scottsdale 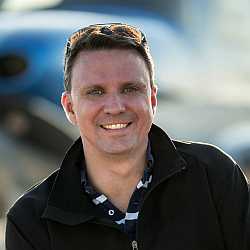