An airline customer service story and a conversation with Brett Snyder, the Cranky Flier. In the news, the EPA is preparing a leaded aviation fuel proposal, a next-generation lav, restraints for infant safety inflight, Ryanair’s Learjets, the West Coast ground stop, lasers on aircraft, a TFR bust that involved an F-15C.

Brian Coleman and our Main(e) Man Micah discuss Brian’s airline customer service experience. He purchased a Premium Plus ticket, but the flight he took didn’t offer that class and the airline didn’t want to refund him the difference in the ticket price.

Separately, Brian had the opportunity to speak with Brett Snyder, the Cranky Flier, and get us caught up with all things Cranky.

EPA Administrator Michael S. Regan says, “EPA has been investigating the air quality impact of lead emissions from piston-engine aircraft near airports for years, and now we’re going to apply that information to determine whether this pollution endangers human health and welfare.” The EPA plans to issue a proposal for public review and comment in 2022. After evaluating comments on the proposal, the Agency plans to issue a final finding in 2023.

More information can be found at Petitions and EPA Response Memorandums related to Lead Emissions from Aircraft.

There is a “next-generation” of lavatories for the 737 family of aircraft, and it’s coming from Raytheon Technologies’ Collins Aerospace. The new lavatory is customizable and modular. A touchless faucet comes standard, with other touchless amenities optional. A “centralized computing system to optimize the passenger experience, improve airline operability and help pave the way for future technology integration.” The lav is expected to be available on new 737 airplanes beginning in 2025.

Unrestrained babies in flight is a serious safety issue and hazard and the NTSB has called for action for years. Avelo is now petitioning the Federal Aviation Administration for permission to use the Baby B’Air Flight Vest to restrain infants inflight.

The Story Of Ryanair’s 3 Learjets

Ryanair has a huge 737 fleet, about 450 in service along with 39 A320 aircraft operated by Lauda Europe. But they also lease three Learjet 45s to transport maintenance crew and parts.

What Caused The FAA To Issue A Brief Ground Stop On Monday?

The FAA issued a ground stop for all U.S. West Coast Flights that lasted 15 minutes. This was at the same time that North Korea was testing a long-range ballistic missile.

The FAA has received a proposal from FedEx Express to install a missile defense system on some of its aircraft.  When detected, heat-seeking missiles would be intercepted by infrared lasers to throw them off course.

2021 was the worst year on record for unruly airplane passengers in the US, FAA data confirms

David’s photos from a TFR bust and an F-15C orbiting the airfield.

US expected to be short 12,000 pilots by next year 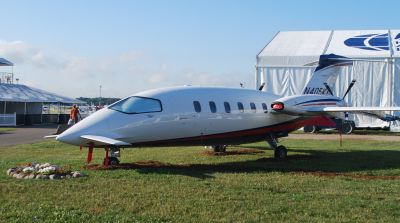