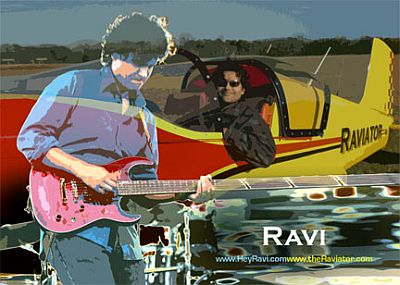 Our guest this episode is Ravi, also known as The Raviator. Ravi gives motivational presentations designed to encourage people to become involved in aviation. Ravi has presented at AirVenture, Sun ‘n’ Fun, AOPA Summits, ATAC (Air Transport Association of Canada), Embry-Riddle, University of North Dakota, and many other places.

He’s a sport pilot and also a musician who has played his guitar on the Letterman and Leno shows, not to mention Madison Square Garden and the White House. He’s also produced AirVenturous, a song about discovering and participating in one of humanity’s greatest achievements, Aviation, and how it is showcased by the greatest air show in the world, AirVenture. Find more Ravi at his Facebook Page.

We talk about the inspiration for AirVenturous, pilot shortages and how that issue might be addressed such as dealing with the cost of becoming a pilot, wages paid to pilots, actions some airlines are taking, scholorships, and more.

David’s Aircraft of the Week is the Grumman F6F Hellcat.

Exercise Pitch Black providing some excellent plane spotting opportunities in Darwin, the Red Bull Air Race is planning to re-launch in 2014 and several Australian cities are bidding to host a round, Australian researchers have invented a laser system to augment pitot tubes, Virgin Australia & Sky West announce the establishment of a joint training scheme based in Adelaide. We also offer a clarification of the carbon tax cost increases to agricultural aircraft, which we talked about in Episode 207.

Pieter welcomes back the AviationPlatform.com team to discuss the latest Benelux news focusing this week on Luxembourg. Frenchez Pietersz and Carmen Van Boeckel gives us their views on Cargolux, the Boeing 747-8F and who’s using social media tools to improve their customers experience (or not)! Aviation Platform is a very different and innovative aviation website so do have a look at their content and activities.

Find Aviation Planform on Twitter as @AviationPlatform. Carmen Van Boeckel is @iCarms and he blogs at icarms.wordpress.com.

Opening music courtesy Brother Love from the Album Of The Year CD. You can find his great music at www.brotherloverocks.com.

Closing music is AirVenturous by Ravi.