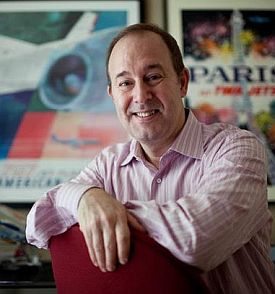 Henry H. Harteveldt is president of Atmosphere Research Group and a well-known analyst and advisor to the travel industry. Henry spent more than 15 years in marketing, planning, distribution, and strategy roles at companies such as TWA, Continental Airlines, the Fairmont Hotel Management Company, and GetThere. He was head of Forrester Research’s global travel research practice and launched Atmosphere Research in September 2011.

Henry is regularly quoted in the media such as The New York Times, Wall Street Journal, and Reuters, and appears on CBS, CNBC, Bloomberg, and CNN. He actively shares his industry perspectives on Twitter.

The new University of North Dakota Career Pathway Program (CPP) with United Airlines solves two problems: the UND need for flight instructors and United Airlines (and its regional partners) need for first officer candidates. Once a UND student is accepted into the CPP, they have conditional employment with United as long as the airline is hiring pilots.

Six general aviation associations issued a statement saying, “We are disappointed that the Administration continues to reintroduce a failed proposal. Instead, it should put its weight behind FAA legislation pending in Congress that will advance the aviation industry, including general aviation, which contributes $219 billion to the U.S. economy and creates over one million jobs in the U.S.”

David Neeleman founded JetBlue Airways Morris Air, WestJet, and Azul Brazilian Airlines. Now he’s raising $100 million to start another airline, provisionally named Moxy Airways. The strategy is for an airline similar to JetBlue, but one that uses secondary airports instead of the major U.S. hubs.

Nicki continues her pilot training series with this installment on roadblocks of flight training.

Major Tech Players – Including Amazon, Google and Facebook – Loom Large Over the Future of Travel Booking

The Future of Travel Booking and Payments report from OAG.